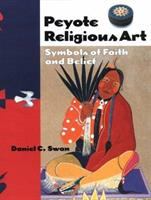 Symbols of Faith and Belief

"Peyote has given me visions," says Elk Hair, a Delaware Peyotist in Daniel C. Swan's new book Peyote Religious Art (University Press of Mississippi $35.00, cloth). "He [Peyote] gave me visions telling me how to study our existence, how to think right. God taught Peyote to teach his children the good ways, to have good thoughts and clear minds before they leave."

Elk Hair's narrative is one of many first-person accounts Swan gathered from practitioners and artisans in the Native American Church, whose holy sacrament is the small, spineless cactus, peyote. Combining 77 full color photographs, 32 black and white illustrations, and many narratives, Swan reveals the convictions, the faith, and the wealth of spiritual artistry surrounding worship in the Native American Church.

Controversial and misunderstood, the ritualized use of peyote by American Indians has long been attacked by non-Indian religious and secular authorities. Despite official efforts to eliminate peyotism as far back as the Spanish Inquisition and as recent as the War on Drugs, its status in Native American spiritual life has not diminished.

Works by self-taught and informally trained artists make up the diverse traditional and folk arts associated with the peyote religion. Peyote art displays an amazing range of genres, including carving, beadwork, featherwork, metalsmithing, and painting. Swan also explores regalia and accouterments that worshipers cherish and the evolution of symbols across time.

Along with previously unpublished first-person narratives by practitioners of the religion and by artists, Peyote Religious Art features art objects from museum collections, works by contemporary artists, and materials from private family collections. Understanding these expressive forms provides invaluable insight into the challenging nature of American Indian life during the twentieth century and into the intertwining of art, religion, and community.

Daniel C. Swan is senior curator at the Gilcrease Museum in Tulsa, Oklahoma. He has published numerous articles on the peyote religion among Oklahoma Indians.

There are no comments for this title yet.

There are no ages for this title yet.

There are no summaries for this title yet.