Saved Searches Advanced Search
The Slidell Branch, 555 Robert Blvd., will be closed until July 14 after a staff member tested positive for the Coronavirus. Following CDC guidelines, all branch staff will be quarantined in order to protect their health and the health of library patrons.
Print 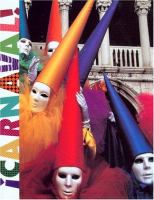 Carnaval, Fasnacht, Entroido, Carnival--the annual pre-Lenten festival most people in the United States know as Mardi Gras is celebrated in cities and rural villages throughout Europe and the Americas. With more than 300 dazzling photographs, this book offers an international look at Carnival in New Orleans and Basile, Louisiana; Laza, Spain; rural Bulgaria; Venice, Italy; Basel, Switzerland; Tlaxcala, Mexico; Oruro, Bolivia; Recife and Olinda, Brazil; Port of Spain, Trinidad and Tobago; and Port-au-Prince, Haiti. Carnival takes similar shapes everywhere European Catholics carried their religion and its festivals. People disguise or adorn themselves in costumes and masks to parade through the streets, eating, drinking, and making music before the Lenten fast begins on Ash Wednesday. But as this book shows, indigenous customs with even deeper roots--and, in many places, customs that accompanied enslaved Africans in their diaspora--became integrated into the festival to give it distinctive local flavors.

In the four rural sites (Laza, southeastern Bulgaria, Basile, and Tlaxcala) many festival rituals are meant to promote the fertility of crops, livestock, and people. In the urban Carnivals of Oruro, Recife and Olinda, Port of Spain, Port-au-Prince, and New Orleans, Carnival groups compete through ingenious masquerades and spectacular performances. Venice's Carnival--a late-twentieth-century revival--is modeled on elite urban celebrations of the Renaissance, and Basel's--one of very few Carnivals to survive among European Protestants after the Reformation--involves large, organized troupes who wear masquerades portraying themes of social and political satire. In Haiti, Mardi Gras celebrations are deeply politicized and have even played a role in overturning governments.The contributors to this book take readers on a colorful journey through Carnival in these eleven far-flung places, outlining the history of Carnival in each area and its present form. The major masquerades are introduced--from Venice's classic Harlequin and Pierrot to Bulgaria's "Kouker" and Port of Spain's "Midnight Robber"--along with the kinds of groups who participate, such as Recife and Olinda's African "nations" and Tlaxcala's charro dancers. The sequence of Carnival events in each location is described, from excited preparation to last-gasp revelry, with tastes of festival food and drink and the rhythm of music along the way.

Whatever deeper religious or civic significance Carnival may hold for its participants, it is always a time of play, conviviality, and fantasy--a time when alternatives to the status quo can be imagined and people can feel unleashed from everyday restraints. This book is a joyous celebration of this many-faceted festival and a tribute to those who have kept their Carnival traditions alive.

A History of Mardi Gras

A History of Mardi Gras It's New Orleans' favorite time of year: Mardi Gras! Do you know the history of this widely popular and celebrated holiday? Mardi Gras, or Carnival, has its earliest origin in Roman times. The Saturnalia, dedicated to Saturn, the Roman God of the Harvest, was a harvest festival celebrated in mid-December. The various inhabitants of Rome and other cities would throw… (more)

There are no comments for this title yet.

There are no ages for this title yet.

There are no summaries for this title yet.