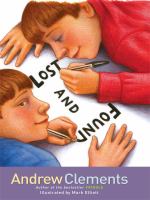 Twelve-year-old identical twins Jay and Ray have long resented that everyone treats them as one person, and so they hatch a plot to take advantage of a clerical error at their new school and pretend they are just one.
Publisher: Waterville, Me. : Thorndike Press, 2009.
Edition: Large print ed.
ISBN: 9781410412454
1410412458

This whimsical tale about identical twins who are going to pull off something big. They have always wondered what it would be like to have an identity of their own rather than being associated with the other. Their whole lives they have been mistaken for each other, but now they start to use it to their advantage. A funny, light-hearted story that is relatable and amusing.

I love Andrew Clements. He writes the best school stories, and his characters are always so relatable! The problems or stories he concocts always let unique perspectives emerge, but in a natural, albeit creative, way.

This book featuring twins does not disappoint. Clements tackles the difficulties of constantly being mistaken for another person. Ray and Jay are fun characters who give us an insight into the world of twins, and they really do love each other, even with their differences. As the story unwinds, we get to see them become their own people instead of just one of a pair.

If you enjoy Clements’ other school stories, you’ll love this one! If you love school stories in general, this is the book for you. But beware, readers! With two main characters, there’s double the trouble!

I LOVE THIS BOOK!!

An interesting story that seems to really capture what it could feel like to be an identical twin.

This book is great with the switcher- oos and such... the ending had a good internal meaning. All in all... pretty good and is recommended. :)

Anika_Singh thinks this title is suitable for All Ages

green_ant_1650 thinks this title is suitable for 8 years and over

blue_dolphin_7071 thinks this title is suitable for 8 years and over

black_tiger_417 thinks this title is suitable for 8 years and over

Yavril thinks this title is suitable for 8 years and over

JamieA thinks this title is suitable for 99 years and over

Lost and Found
The Grayson twins are moving to a new town. Again. Although it's a drag to be constantly mistaken for each other, in truth, during those first days at a new school, there's nothing better than having a twin brother there with you. But on day one of sixth grade, Ray stays home sick, and Jay is on his own. No big deal. It's a pretty nice school, good kids, too. But Jay quickly discovers a major mistake: No one seems to know a thing about his brother. Ray's not on the attendance lists, doesn't have a locker, doesn't even have a student folder. Jay almost tells the school -- almost -- but then decides that this lost information could be very...useful. And fun. As Ray and Jay exploit a clerical oversight, they each find new views on friendship, honesty, what it means to be a twin -- and what it means to be yourself. Entertaining, thought-provoking, and true-to-life, this clever novel is classic Andrew Clements times two: twins!