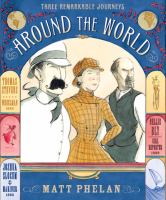 Elizabeth Jane Cochran, better known by her pen name, Nellie Bly, was born on May 5, 1864 in Cochran’s Mills, Pennsylvania. She left school in 1871 due to the lack of funds after her father died. In 1880, her mother moved the family to Pittsburgh for better job opportunities. It was here that Elizabeth would get her start in newspapers. When a local newspaper, the Pittsburgh Dispatch,… (more)

Excellent trio collection of stories of amazing global travel with three very different people including Thomas Stevens Wheelman, Nelly Bly Girl Reporter and Joshua Slocum Mariner. All from the 1800's and all equally remarkable. A very adventurous and worthy read.

This book is a good introduction to three fascinating adventurers in the 19th century. However, the one issue that I have with this book is that Nellie Bly is presented as rather ugly. The real Nellie Bly was attractive. Overall, though, this is a good intro. to these interesting people. Recommended.

Maybe this’ll inspire some kid to read Around the World in 80 Days. Or maybe even vow to take a trip around the world themselves someday. If three people could do it for such vastly different reasons, so too can a 21st century kid. Around the World allows us to gape in wonder at those folks that finished what they began. By bike, by sail, by train, they circled the globe and lived to tell the tale. And Matt Phelan knows just how to bring such tales to life. Great stuff.

Picture book illustrator Matt Phelan won critical acclaim for his 2009 historical graphic novel The Storm in the Barn, a Depression-era story tinged with fantasy. His new book, Around the World, is no less enchanting for being based on fact. In 1873, Jules Verne published Around the World in Eighty Days, his famous adventure story about a high-stakes race around the world. The novel captured the public imagination, and a few intrepid real-life adventures determined to embark on their own worldwide round-trips. Phelan?s beautifully illustrated book follows ex-miner Thomas Stevens on his bicycle (the old-fashioned kind with the giant front wheel), sea captain Joshua Slocum all alone on his thirty-six-foot ship, and sassy reporter Nellie Bly as she charges around the globe to beat Jules Verne?s fictional eighty-day challenge. The adventures are thrilling enough in the ARC?s black and white; the final book is published in glorious full color.

In the second half of the 19th century a fictional character set out with a challenge. His name was Phileas Fogg, the book was Around the World in 80 Days and the challenge was inherent in the title. So popular was the novel that it inspired others to travel in Fogg’s footsteps, so to speak. Three in particular come to mind. First, a miner by the name of Thomas Stevens. Thinking that there must be more to life than spending it underground, Stevens was inspired when he saw his very first bicycle. After purchasing one and biking across the country Stevens got it into his head to go bigger. Why not bike around the world? Next up, the intrepid female reporter Nellie Bly who vowed to beat Fogg’s 80-day mark and became a national sensation in the process. Finally there was Captain Joshua Slocum, a man haunted by his own past who sailed around the world over a time span of more than three years. Three people. Three reasons for their trips. Three entrancing stories.